I recently got the opportunity to visit this firewater mineral healing spring in St. Ann’s Bay.

I’ve been hearing about it for some time now but it’s not a popular attraction so it’s difficult to find any information on it.

I happened to be driving with a friend that knew where it was, so I decided to pass by.

There are no signs anywhere to help you to find the place and the road to get there is a hidden single lane dirt road with some of the worst pot-holes I’ve ever seen. I remember asking Prince (my navigator), several times “you sure this is the right way?”

Finally we got to a dead end with just enough space to turn the car around. I was in the middle of a poor rural community. Definitely not somewhere you would expect to see any tourist activity.

At this point, I still saw no sign that said Firewater, or anything to confirm that this was the right place. All I saw was a small bar with a bunch of locals sitting at the counter. 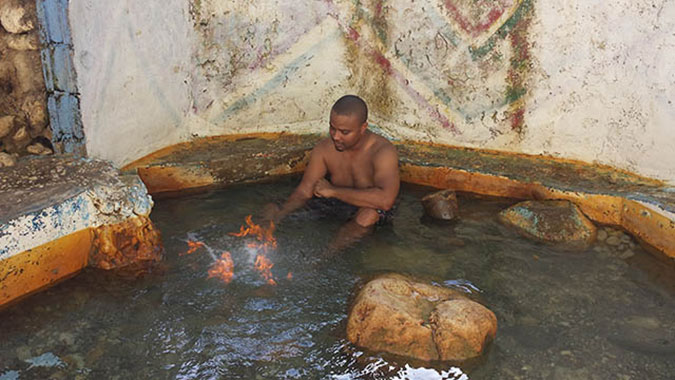 So I walked over to the bar and ordered a cold Red Stripe. The bartender could tell I was a local Jamaican but he also knew I wasn’t from around there. “You come to see the mineral water?” I said, “Yes! Where is it?”

He signaled to someone sitting on the other end of the bar counter. “This is Kevin. He’ll give you the tour.”

Following behind Kevin was another Rasta man who I later learned was called “Shaka Macka”. If you watch the video below, you’ll see him.

They took me over to the firewater pond which wasn’t far from the bar, behind a bamboo fence. It’s not much to look at and it’s in the middle of nowhere but it’s definitely an interesting place with an interesting story.

Rumor has it that this water has mystical healing powers. I’ve heard stories of people being cured of their skin infections and arthritis by soaking in the pond for a while. I’m not sure if I’m a believer but I can say it’s very different from anything I’ve ever seen.

Kevin told me that his great-grandmother accidentally discovered that the water could actually be lit on fire. She was burning something nearby and somehow the flames got out of hand and ended up in the water. Lo and behold, the flames kept burning on top of what was before thought to be a normal spring.

In shock, she ran off to tell everyone what she had seen but everyone thought she was seeing things, until they saw it for themselves. 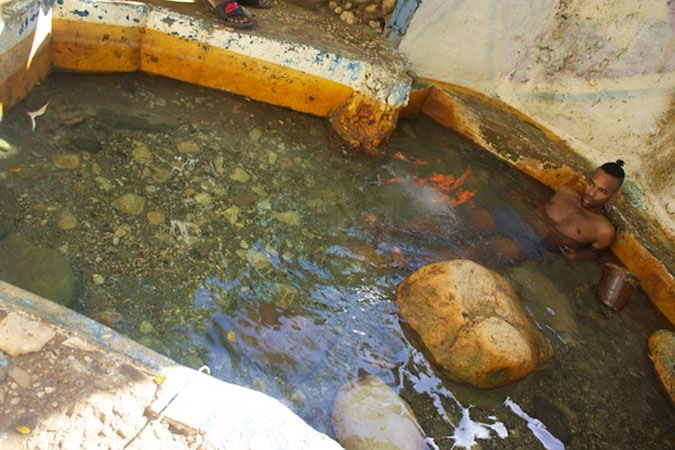 Kevin also told me that scientists from all over the world have come by and taken samples to test. He claims that they have confirmed it’s external and internal healing properties.

The area is about the size of a large jacuzzi. The strange mineral water is constantly being pumped up from the ground and there’s a plug that has to be pulled ever so often so that it doesn’t overflow.

The water is lukewarm and has a salty/bitter taste. Kevin told me I could drink it but I wasn’t feeling that adventurous. Prince (my navigator) on the other hand downed a handful.

I remember my skin feeling extremely tingly after coming out of the water. Definitely different from any other water I have ever been in.

I can’t say that I would highly recommend visiting this place. But it’s definitely an interesting, one-of-a-kind place. If you do, you’ll get some great photos that will amaze your friends. And who knows, maybe you’ll heal an ailment you didn’t even know you had :-).